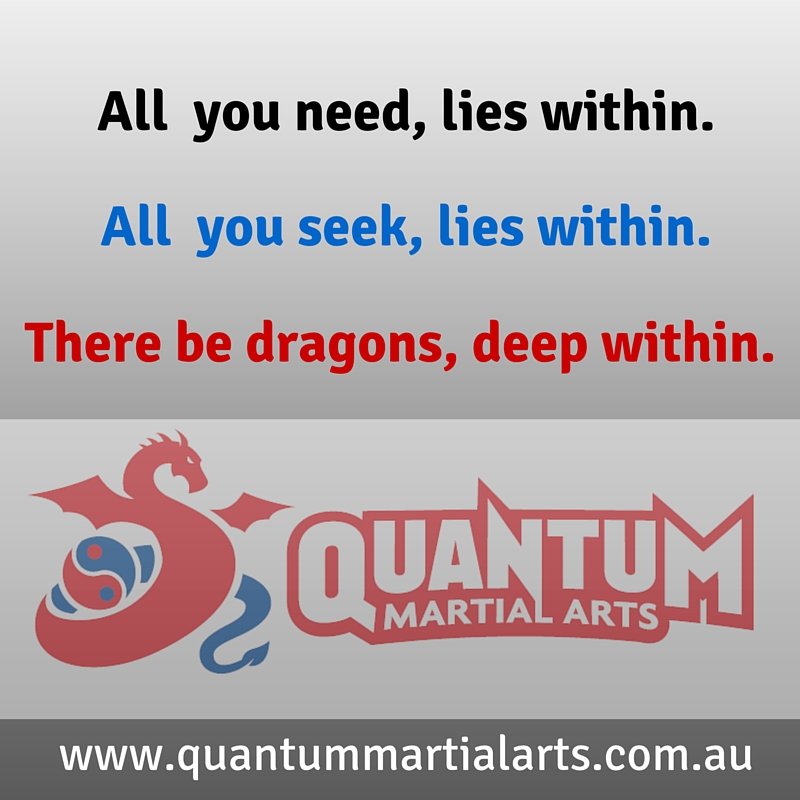 Following on from Darren’s great blog post last week on what our logo means to us, I thought I would give some insight into how we developed the name for our martial arts school ~ Ben

When Darren and I decided to open up a City branch of Northstar Ju Jitsu, and having gained Andy Sensei’s blessing, the first order of business was to come up with a kick ass name for our dojo.

Fancying myself a bit of a wordsmith I set myself the task of coming up with the name. Day after day I texted ideas through to Darren –

Darren’s responses – too boring, too bland, too generic, already taken by some tai chi school in Melbourne… it got to a stage where he’d just ignore the text suggestion if he didn’t like it.

It was like trying to staple jelly to a wall.

Then one day he texted back “How about Quantum Martial Arts?”

But he was right… it just resonated straight away.

Then I started to research a bit and it just confirmed why it was the right name for us.

“In physics, a quantum is the minimum amount of any physical entity involved in an interaction… As incorporated into the theory of quantum mechanics, this is regarded by physicists as part of the fundamental framework for understanding and describing nature.”

Immediately this speaks of precision and efficiency of movement, and effectiveness of action– all hallmarks of Northstar Ju Jitsu, the style of martial arts we teach. This concept is at the heart of QMA’s approach to teaching our students – keep it simple, quick and expending minimal energy for maximum effect.

We also fundamentally believe that our journey in teaching martial arts and helping our students learn martial arts moves beyond the physical elements into the mental and spiritual dimensions – training mind, body, spirit. As such it is a part of our fundamental frameworks for understanding and offering service to the world (or our little corner of it).

Moving into more mundane areas both Darren and I have careers in finance and accounting – we are numbers men… and the root word for quantum is “quantus:” which is Latin for “how much”.

Another concept which resonates with us is the idea of a “quantum leap” – a metaphorical concept of an abrupt or extreme change. At QMA we absolutely believe that we can help our students make quantum leaps in improvements in fitness, self-defence skills, health, relationships and confidence in dealing with life.

Share on TwitterShare on FacebookShare on PinterestShare on LinkedInShare on Email
Posted in Martial Arts Sydney, Self Defence Sydney and tagged build a better you, dojo, fitness, fun, lifestyle, martial arts, motivation, quantum, Self Defence
← The Story Behind Our LogoMental Preparation For Martial Arts Class →